Yeah, you read the title right… but why would South Korea do something like that for the US? I have heard a lot of people talk about their thoughts on the subject, but I did the research to get the facts for you. This topic has been written about a lot, here is a great Time Magazine article that breaks it down pretty well. So I am gonna keep this pretty high level, to the point.

To me, there are a couple obvious reasons why South Korea would virtually pay us to move. The most obvious is that they are getting a huge chunk of invaluable real estate in downtown Seoul back. Although not all Koreans love having us here, you can’t argue with the fact that our presence wards off their enemy. While they have a long-standing truce with North Korea, they are technically still at war. Not to mention the centuries of bad blood and tension between Korea and the other two neighboring countries, Japan and China. Further, I think the idea that they paid for the whole thing is interpretation and political posturing on both sides. As you will read below, Korea pays us about a billion dollars a year as their burden share of the defense efforts here. The money that was given to us, per that agreement, was what was used to pay the US half of the expansion. The US doesn’t want to say that they spend taxpayers dollars building a brand new fancy post during peacetime, especially with the state of the American deficit and the calls to reduce Defense spending. On the Korean side, they want to take credit for it because it gives them ownership of both the development and the protection services that come along with it, money is power.

“The USFK established its Yongsan headquarters in July 1957 after the end of the 1950-53 Korean War. In November 1945, the number of American troops in Korea topped 70,000.  In June 1949, it withdrew all troops in Korea except for some 500 of the U.S. Military Advisory Group. Curtailed to Europe. Following the North’s invasion on June 25, 1950, American troops returned to the peninsula to defend the South under a U.N. mandate. During the Korean War, the U.S. dispatched more than 320,000 troops to the South,” (Source).

The allies agreed to the relocation program in May 2003. The agreement came as Washington was seeking for greater strategic flexibility in its USFK operations, in line with its military realignment program, called the Global Defense Posture Review (Source).

Camp Humphreys is a US military base built and expanded as part of a USFK relocation effort underway since the Roh Moo-hyun administration in the early 2000s. Entering full swing after an April 2003 summit agreement by Roh and then-US President George W. Bush, the project has two parts. The Yongsan Relocation Plan (YRP) involves relocating Yongsan Garrison in Seoul to Camp Humphreys, while the Land Partnership Plan (LPP) is for the 2nd Infantry Division’s relocation to the same camp (Source).

Media accounts from the time describe the forced relocation as land grabs accompanied by some of the largest and most violent anti-base protests in modern South Korean history (Source). 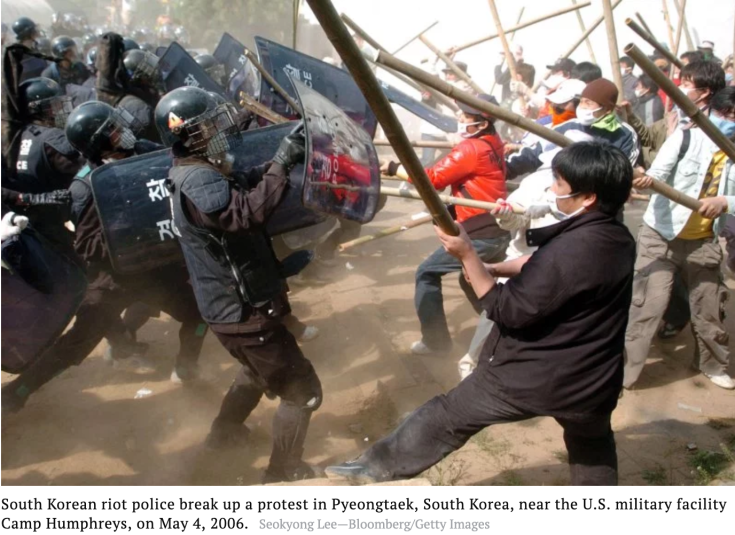 The move initially was scheduled for 2008, then was pushed back to 2012 and later to 2016. When asked how the work at Humphreys could be finished in three years, a Relocation Office spokesman, speaking on customary condition of anonymity, refused to provide further information about the construction schedule (Source).

Indeed, the appendix and annexes to the LPP agreement stipulated that the US would provide alternative facility funding for 15 of the 28 bases scheduled for closure with the relocation (Source).  Various sites quote different numbers on how many posts existed and how many will exist after consolidation, for instance, the Stars and Stripes wrote, “This will allow U.S. Forces Korea to consolidate its footprint on the peninsula from more than 100 installations to less than 50.”

There will be 650 new or renovated buildings (Source). 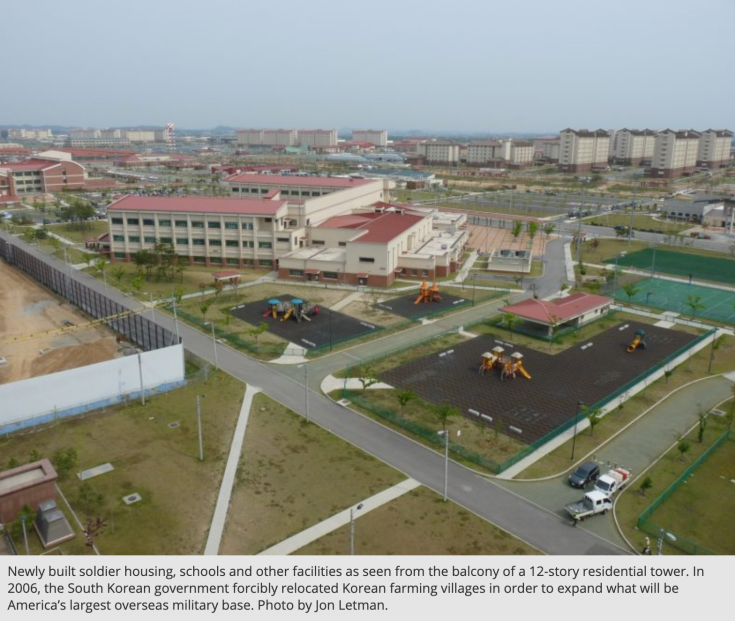 Former Eighth Army commander Lt. Gen. Joseph Fil told Stars and Stripes in 2010 that it was the biggest U.S. Army Corps of Engineers project since the construction of the Panama Canal and taking just as long to build.

The Cost and The Why

In written testimony submitted to the US Senate Armed Services Committee at the end of April, USFK Commander Vincent Brooks explained, “Construction of new facilities under YRP is 100 percent R.O.K. funded, while those under the LPP are 100 percent U.S. resourced. Total project costs are approximately $10.8B, of which only 8 percent of that comes from U.S. appropriated funds” (Source). 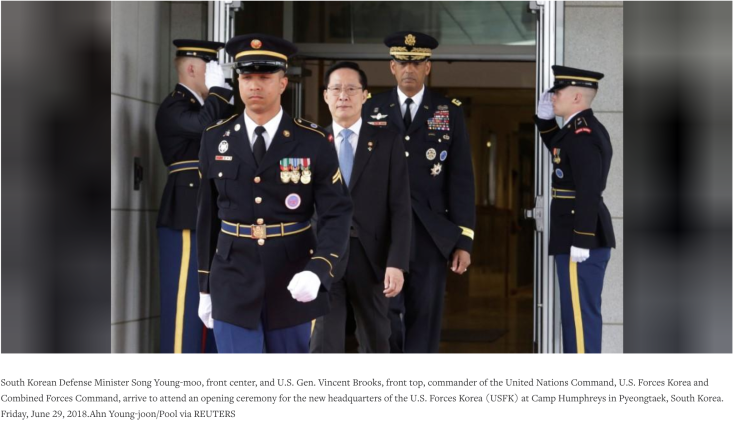 The debate about increasing costs and allocation of funding centers on South Korea‘s defense contribution, which is to say what Seoul provides, both in cash and in-kind, to USFK according to the Special Measures Agreement (SMA) that Seoul and Washington have renewed every two to five years since 1991. There are three categories of support: wages for South Koreans who are hired by USFK (in cash), military construction costs (in cash and kind) and military supply costs (in-kind). Article 5 of the Status of Forces Agreement (SOFA), states that the US is responsible for all American military costs aside from facilities and areas (Souce).

South Korean funds are meant to offset, not supplement, the use of U.S. taxpayer dollars and should be spent on mission-critical projects. However, some South Korean contributions had been put toward “projects of questionable value or that do not make economic sense,” such as a $10.4 million planned 2nd Infantry Division museum at Humphreys. Some feel that the garrison treated the South Korean funds as “free money” rather than a way to offset the U.S. costs of the project (Source).

“My understanding of the 92% is that it included the South Korean defense contribution used by USFK,” a senior government official said, adding that it “should probably understood [sic] in terms of the national interest as a reversal of the administration’s position,” (Source)

General Brooks, Commanding General of the US Forces Korea at the time said, “The Republic of Korea’s investment was over 90 percent of the cost, and for that 90 percent, the United States remains with you 100 percent” (Source).

The USFK’s previous base in Seoul will be transformed into a public park similar to Central Park in New York City (Source).

Thanks for coming back and reading my post. What do you think about all of this? I have to admit that this was not really fun to write about. I did it for you guys because I said I would. Not sure what I am going to write about next, but I intend to have more fun writing it than I did this one!

Letman, Jon (2017). The Diplomat. USAG Humphreys: The story behind America’s biggest overseas base. Recieve from: https://thediplomat.com/2017/11/camp-humphreys-the-story-behind-americas-biggest-overseas-base/